I had the opportunity to spend the first week of 2023 in Las Vegas. No it wasn’t all for fun. We were there for CES, Consumer Electronics Show. And I was delighted to be activating (in person!) several premier hospitality suites for our clients, 3M, to host executive meetings and demonstrations. Once meetings were underway, I took the opportunity to navigate the show floor. 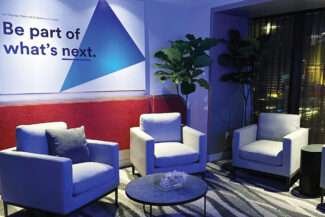 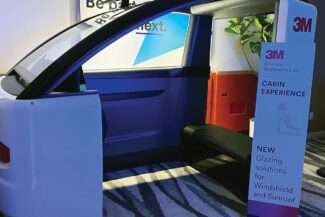 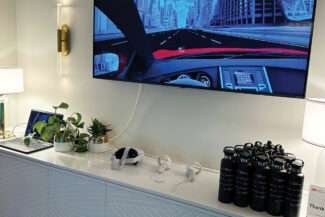 To say this trade show is massive is an understatement. IT’S MASSIVE. Primary exhibits were spread across not only the Las Vegas Convention Center, but onto the Sands Expo center and ARIA properties. Additional exhibits at MGM and multiple pop-up activation and builds in parking lots across and high-floor hotel rooms above the Las Vegas Strip. Las Vegas is a walker’s world, and I certainly earned my steps this trip.

The press does a great job narrating the “cool tech toys” that emerge each year, but I was on the lookout for design inspiration. How and what types of materials were exhibitors using in their booths. How did they approach the form, function and flow of their exhibit spaces? And how were they going to capture my attention?

Exhibits which drew my attention were inviting and felt like a contemporary shopping experience.  They used a lot of natural (or fake natural) products, especially wood in warm tones, plants and greenery. The floors, walls and furniture all suggested I was stepping into a room, and away from the bustling trade show booths. Lighting fixtures were contemporary and drew attention to key messages or displays. Video screens and content were dynamic extensions of the experience enticing me in. 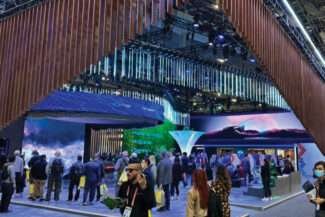 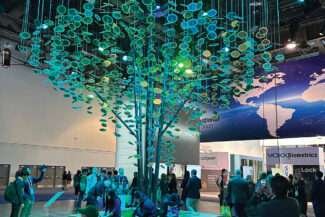 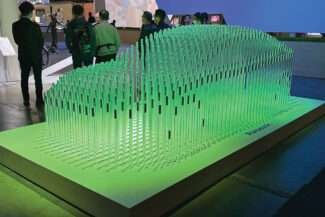 Two of the most impressive exhibits – LG and Samsung – leveraged different strategies yielding different experiences. LG was immersive. The front of the exhibit featured a massive curved television wall with vivid content. Mirrors capped the exhibit giving it an “endless” feel.  Once inside there was something to see everywhere. Overall dark and colorful, little rooms were dynamically lit to showcase products for home, gaming, health and wellness and of course, more televisions.  I could exactly tell if I was more impressed by the transparent TV or the wireless one, which was showcased in a dynamic moving display “floating” over a water feature. This exhibit was energizing, enticing, my emotional response was heightened.  But it also seemed a bit chaotic, busy and confusing on where to look next or what was most important.

The Samsung booth was also massive and featured numerous dynamic video walls. But they choose more of a narrative journey. First, guests had to cue in front of the booths limiting the number of people actually inside. Once inside this primarily white and white lit exhibit, you followed a path denoted on the floor by a blue line. This pathway guided your journey past messages and technology demonstrations. It felt more like a gallery in a museum, and this approach made it far easier to understand the story and the meaning behind what was being showcased. 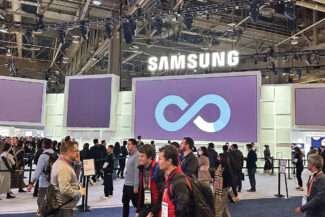 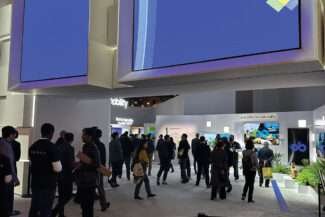 Finally, I noticed an overall trend in interactive experiences that put the user inside the tech. Beyond trying the full body massage chair, putting yourself into the game or into the virtual world seemed all the rage. Whether it was the Nikon camera robot experience which let guests ride a motorcycle and be in a movie. Or Sony doing 360-degree capture to put the participant directly into a virtue game, it was all about making your own avatar. The most unique example featured a cube of led lights in which your “digital twin” would appear, responsive and reacting to you looking at it.

In a closing note, I’ll say I was very inspired to see the prominence of messaging and technology aimed at easing the experience of everyday life. A commitment to sustainability and inclusivity in tech, as well as solutions for health and wellness were at the forefront. At least they caught my attention. My hope is that these are more than taglines, but a true commitment from Tech to address the global inequities in our world.

Curious about how to leverage tech at your event?